A Lotus in the Mud: An Interview by Pragati Sharma

Dilshad Ali and Tilak Raj have been friends for over 20 years now. From sharing a rented apartment to sharing food, their story of love and care despite different faiths is all what we need to look up to. A simple story with foundation of values of compassion and respect; basic and yet forgotten.

The Khan Rajma Chawal stall comes across as any other roadside food joint in Chandigarh. It sells delicious Rajma Chawal and Curry Chawal at prices starting as low as ₹30.

The owner Dilshad Ali and his friend Tilak Raj, along with two helpers can be seen setting up their food stall a little after noon. It is usually the lunch hour, and customers from office-goers, passers-by to students can be seen buying from them. Students are especially fond of their feed and thus are seen in more numbers. Ali and Raj remain busy for the next 3 hours as customers come steadily.

Dilshad Ali and Tilak Raj have been selling Rajma Chawal and Curry Chawal for 3 years now in Sector 15 Market, Chandigarh. However, it isn’t just the delicious food they sell that makes their story worth sharing, but a tale of incredible friendship thrashing stigmas and stereotypes.

In present times when it is hard to overlook cases of communal tensions, their story sets a confident example of tolerance and fraternity between religions. The intimacy is both an inspiration and assurance to gladden our hearts.

Dilshad Ali Khan, a Muslim by faith and Tilak Raj, a Hindu, boast of a friendship which is 23 years old. The friendship has witnessed no ups and downs in these years.

“Ups and downs in friendship come with selfish interests. Here, it is pure love and support.”

Dilshad, who started off as an electrician says he always have had love for cooking and wanted to pursue it. “I used to see youngsters around, they had problem finding good food here. My only attempt was to provide them quality food so they don’t miss home.” His wife, who also is a good cook, helps him in preparing the food. Tilak Raj, otherwise a government employee, comes only to help during the selling hours. He talks less and is quiet during most of the interview.

In response to skirmishes in the relation due to different belief systems, they say there have never been any.

“It never felt like we are different or our beliefs are different. Mazhab nahi sikhata, aapas mein bair rakhna (Religion does not profess hostility). We follow this teaching.”

Overall, the city has been kind to them, but their association have now and then faced criticism which “isn’t deserving enough to be paid attention to and should be ignored.”

Talking of the persisting communal tensions in the country, Dilshad says, “The government should not try to incept communal hatred and rather maintain a congruous atmosphere. It is only a handful of people who try to disturb the peace and such people have no religion. Amidst of all this, it takes an effort to preserve this brotherhood of ours, allowing it to not get stained. I pray to Allah that it stays the same.”

Pleased at being able to provide healthy and hygienic food at a reasonable price, they plan to extend the business. The food comes as a savior to students living as paying guests and is greeted with immense liking as people appear in considerable numbers.

“I am a college student and I live in a paying guest (PG) accommodation, so it feels really good to have lunch there. It reminds me of my mother’s hand made food.”, says Shraddha Juyal (20), a college student. “Khan stall’s food gives me a taste of home away from home!”, says another college student,  Anmol Kaur (20).

Their beautiful pact among serious communal conflict prevalent today, blooms and stands alone like a lotus in the mud! (pun intended) 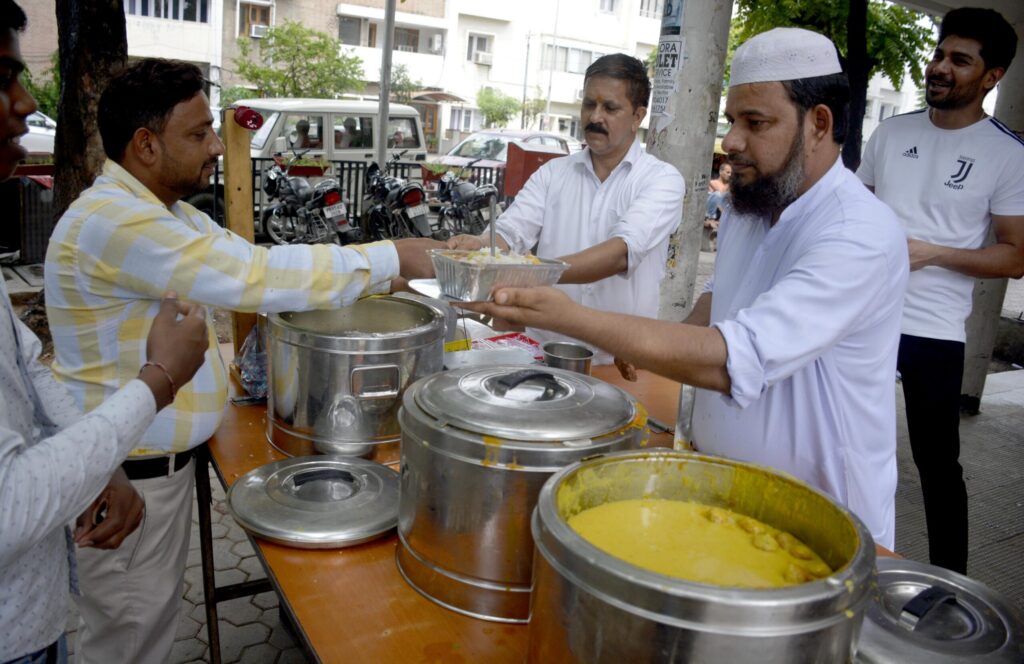