The “Hurt” Sentiments That Give Rise To Crime, Injustice, Divide And Hatred 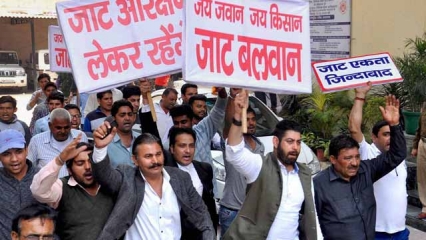 We, Indians are easily among the most judgemental people in the world. We are very quick to criticize something or someone just after a glance without even caring what the whole thing really is about. But this is normal human behavior. Our minds are wired to reach conclusions quickly.

On the other hand, when it comes to caste or religion, you can easily notice an amusing difference in people’s perceptions. Suddenly they start looking for ways to somehow defend their own caste or religion even if they are in no way directly involved. They still take it personally and do not rest until the whole thing subsides.

I was forced to notice this behavioral pattern in past few days while the incidents like jamming of roads and railways, aggressive attacks which resulted in damage to public property, stealing of money from ATMs and setting shops, malls etc. on fire by people in the name of “Jat Agitation” in response to not meeting their demand for reservation, were taking place in the state of Haryana and all the national news channels and papers were providing extensive coverage to everything that was going on.

Condemning the kind of incidents that were taking place and taking a dig at the demand of reservation by the people of a caste who have been known for proclaiming themselves royal and rich and are in fact neither socially nor economically backward, I posted a status on Facebook about the irony of such demand. To my surprise and amusement alike, some of my Facebook friends who belong to the same caste as the agitators started to defend and justify the protests. One of my friends actually called me to know if I had started to follow some politician who had been raising voice against the undue demand of reservation by their caste. Well, you don’t have to follow someone to see whatever is going on is wrong and speak against it and I told him the same thing.

But the funny thing was, those who were defending the riots were not even participating in the protests and I have had even seen few of them speaking against the whole idea of reservation. And now that the people of their caste are asking for reservation or rather blackmailing the government to get the reservation by disrupting the lives of innocent ordinary people, they suddenly have grown a soft corner for them.

However, there were few who raised their voices against the riots without caring about their caste but a majority of people criticized them for bringing a bad name to their caste like it wasn’t already taken care of perfectly by the agitators. I do not understand how you can justify even blocking a road, let alone other more aggressive acts that took place recently, just so that you can demand reservation for a single caste. It causes inconvenience to all those innocent people who have absolutely no role to play in this whole reservation crap.

Why is it that our caste or religion is way more important to us than humanity and the greater good of people? I wonder what these friends of mine would be like if the people of ISIS or other such terrorist organizations belonged to their caste as well. They would have certainly cried every time a terrorist was hanged to death by our law and protested against it in the same way they did for the reservation.

I can now see why it is so easy for the politicians to win elections through their dirty politics of caste and religion. It is actually us and our sentiments for our caste or religion to blame for being the biggest hurdle in our country’s development; everybody and everything else comes secondary. We are the biggest fools in this whole conspiracy of keeping people divided in the name of caste and religion, but one thing is for sure – We won’t change!

I wanna hear what you have to say: Cancel reply